The picture above was kindly sent to me by Luton Culture, when I asked to see a more detailed version of this particular corner of the Luton Guild Book’s frontispiece. (See here in its entirety, but in less detail.) The figures who have been identified on the frontispiece are Edward IV and Elizabeth Woodville, with Archbishop Rotherham in the foreground; but I believe this piece has other hidden treasures as well.

In short: I believe the lady in blue on the right is Anne Neville – and that would make this the most realistic likeness we have of her.

Let us first consider the pictures we know to represent Anne. None of them are especially satisfactory as portraits, but when you look at them in close detail, they do give more information than the low-quality versions that are usually in circulation. (Click the image to see it in full size.)

What we can gather from the first two is a slender young woman with an oval face; soft features of somewhat child-like proportions; a small straight nose; a smallish pouty mouth; a high forehead; and a rather weak chin (the like of which can also be seen on the effigy of her aunt Joan Neville, Countess of Arundel).

The third picture tells us less. The women on the Salisbury Roll conform to a specific template: the earlier women of the family are practically identical to each other. Anne, Richard, and Anne’s mother (alongside her husband, whose face is covered with a helmet) are later additions, and the artist follows the earlier template, but there’s enough differentiation on the level of detail to show that some small degree of realistic representation is attempted. At the very least, Anne has a smaller chin and nose than her predecessors.

Anne’s hair here is a lighter shade of red than her mother’s, but it’s hard to tell the colour of her eyes; there seems to be a tinge of blue paint in them, but it might also be green. (Richard’s eyes on this picture are, strangely enough, flesh-coloured.)

For the sake of comparison, here are the pictures of her mother, the Countess of Warwick, from the same sources. As you can see, the facial features – though drawn in a simplistic fashion – are quite constant between them.

Another interesting picture is a court scene from Writhe’s Garter Book. (I’ll post other fascinating detail images from this book later on, as I believe it may show a scene from the Garter ceremony of Elizabeth Woodville’s son, the Marquis of Dorset.) Here are the women who are seated on the other side of the King:

It’s an interesting example of a clumsily drawn picture that nonetheless clearly differentiates between the people it represents. Just as an intriguing example, look at the woman who sits on her own in the background, in the middle of the picture above. She is drawn with a few simple lines, but the proportions of her face, her full lips and her large eyes make her look much like the full-lipped and large-eyed pretty young woman who also appears in the Luton picture. (I’d love to know who she is. As an aside, the woman beside her in the Luton picture bears something of a resemblance to Elizabeth Woodville, so, considering her rank, I think there’s a possibility she might be Elizabeth’s younger sister Catherine, the Duchess of Buckingham.)

The first women in the foreground of the Garter ceremony scene are clearly royal, judging by their apparel and by their position in the picture. At first I took them to be the King’s two sisters, but if the picture does depict Dorset’s Garter ceremony in 1476, the other woman can’t be Anne of York, who had died in January 1476. In that case, the first woman in red, who has a white rose pinned to her headdress, might even be the King’s mother Cecily. (On the other hand, Anne of York might be depicted posthumously as well.)

The next pair of women are arm-in-arm, and I believe them to be the Neville sisters. I admit the other one would be a rather poor depiction of Isabel, but the lady in the red dress does conform to Anne’s facial ‘type’ from the previous pictures.

Now, coming back to the Luton Guild Book. The woman behind the Queen is obviously one of the King’s sisters, judging by the royal coat of arms on her cape. (She also bears a resemblance to the second woman in the picture from Writher’s Garter Book; the one who has either a pearl trim or gold embroidery along the edge of her headdress.) The women behind her would be the ones who are next in rank: the wives of the King’s brothers. I suggest that the woman in red is Isabel Neville, Duchess of Clarence, compared here with her picture from the Rous Roll:

I think there is a considerable similarity in the facial features, with a chin and nose much more pointed than Anne’s.

If that one is Isabel, rank-wise it would make sense for the woman beside her to be her sister Anne. The facial features would match as well (again, click the collage to view in full size):

Indeed, I think there is a startling similarity between the last two pictures – potential depictions of Anne, taken from the same angle.

If Anne and Isabel are the ladies in the picture, then there’s a possibility that the Luton Guild Book holds another hidden treasure as well: a picture of Richard as a young Duke of Gloucester, as well as a picture of George, Duke of Clarence. I believe there is a strong possibility that the man in blue is Clarence, and the man in green Gloucester. 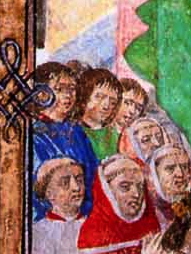 This detail is cropped from the image of the frontispiece on Mediaeval Imaginations by the University of Cambridge, but it would be interesting to see this part in closer detail, as well.

Advertisement
A blog about the various interesting tidbits and morsels I happen to come across in England circa 1440-1485. Occasional forays into other places and time periods, as well.
I've also got a very different blog, Needletwig, which is mostly about my creative projects.